Read why a father-daughter dance was cancelled and why a bond between a young girl and her dad is so important.

Father-daughter dances are no more.

It is accepted wisdom that we live in a free country. Every kid in grade school learns that. We have a free, if flawed, press. Even with the virus, we’re pretty much free to assemble; peaceful protest is legal. We can worship if we want, or we don’t have to if we don’t want. And, of course, we have the right to vote.

So, why would anyone even seriously question whether we live in a free country?

Because, in reality, we’re not nearly as free as we’d like to think.

Just because we still have free-speech rights doesn’t mean we feel free to exercise those rights, to say what’s on our minds. What if we’re afraid to voice our opinions? Are we still free then?

Which brings us to a new study by the Cato Institute.

Let’s start with this — about how a majority of Americans are so afraid of what could happen to them if they express an unpopular opinion. Nearly two out of every three Americans (62 percent) say the political climate these days prevents them from saying things they believe — because they’re worried that others might find their opinions offensive.

Right from the moment we won the revolution and sent the British packing, we’ve liked to think of ourselves as a courageous, tough people. Fear was not part of who we were. Yet now, two out of three of us are afraid to say what’s on our minds, not because a dictator might lock us up but  because someone’s feelings might be hurt. Welcome to America 2020.

Cato says this fear crosses party lines: 52 percent of Democrats have opinions they’re afraid to share, 59 percent of independents feel that way, and so do a staggering 77 percent of Republicans. And what might happen, they fear, is that if they say the “wrong” thing, they might get fired and lose their livelihoods; Cato found that one in three Americans (32 percent) who work say they’re worried about missing out on career opportunities, or losing their jobs, if their political opinions became known.

Given the political climate these days, Americans may have good reason to be afraid. But whatever this is, it’s not tough and it’s not courageous; it’s not who we like to think we are.

Here are some other numbers that should worry all of us:

If you think that’s bad — and it is — consider this: 50 percent of those who identify as “strong liberals” say it’s okay to fire executives who personally donate money to President Trump’s reelection campaign.

“Taking these results together indicates that a significant majority of Americans with diverse political views and backgrounds self-censor their political opinions,” according to Cato. “This large number from across demographic groups suggests withheld opinions may not simply be radical or fringe perspectives in the process of being socially marginalized. Instead, many of these opinions may be shared by a large number of people. Opinions so widely shared are likely shaping how people think about salient policy issues and ultimately impacting how they vote. But if people feel they cannot discuss these important policy matters, such views will not have an opportunity to be scrutinized, understood, or reformed.”

This is the America we live in.

As a correspondent for CBS News for many years, I traveled to many countries, including authoritarian countries such as China and the old Soviet Union. As a general rule, people in places like that aren’t likely to share their opinions. There are consequences for holding the “wrong” opinions; you can get into serious trouble if you have “unacceptable” ideas.

No, I’m not suggesting that the United States is like China or the old Soviet Union, where having an unpopular opinion might get you a train ride to a “re-education” camp or a jail cell in the gulag. But I am suggesting the obvious: People in a free country shouldn’t be afraid to say what’s on their minds.

But it looks like a majority of us are.

The government hasn’t taken steps to curtail free speech. Not yet, anyway. And there may not be a need to do so: A majority of Americans are censoring themselves.

Bernard Goldberg, an Emmy and an Alfred I. duPont-Columbia University award-winning writer and journalist, is a correspondent with HBO’s “Real Sports with Bryant Gumbel.” He previously worked as a reporter for CBS News and as an analyst for Fox News. He is the author of five books and publishes exclusive weekly columns, audio commentaries and Q&As on his Patreon page. Follow him on Twitter @BernardGoldberg.

As we find ourselves in this new normal, we have seen long standing agendas, which have remained behind the scenes, hidden away from the public, now being offered as solutions justified by this crisis. The World Economic Forum’s ‘Great Reset’ and the ‘4th Industrial Revolution’ are perfect examples of prepackaged ‘solutions’ being rolled out to save us from ourselves. Today we will dive deeper into this agenda and also focus on how it may reshape our lives if the technocrats have their way. In this episode, Spiro is joined by John Klyczek, an Adjunct Professor, researcher, contributor to Activist Post as well as several other alternative news sites and the author of the book ‘School World Order: The Technocratic Globalization of Corporatized Education’ For generations the social engineers have used the strategy of indoctrination to target societies most impressionable minds, our children, through many avenues but primarily through our education systems. In this interview, Spiro and John Klyczek break down the how this longstanding and effective tactic is being ‘reimagined’ by the usual suspects, to reshape the future of humanity.

If you have time – this is just over 31 minutes

Studies on the effectiveness of face masks

North Georgia offers a positive plethora of natural adventures and wonders; I try and sample as many as I can. You can check out some of those outdoor adventures HERE, and some of my more spring, macro-oriented adventures HERE. However, as with any locale populated by Homo sapiens, there are occasionally non-natural oddities that warrant […]

Source – naturalnews.com – “…In 2017, the Pentagon acknowledged that they had been funding a secret multimillion-dollar program dedicated to investigating credible UFO sightings….Back in March, a former consultant for the UAPTF made a briefing to representatives from the Pentagon concerning certain aspects about the program. The former employee mentioned the retrieval of “off-world vehicles […]

ABOVE TOP SECRET, ‘EYES ONLY’: Top-Secret Pentagon Department to Address Claims it Found ‘Off-World Vehicles Not Made on this Earth”

Source – grahamhancock.com – “…NASA would clandestinely confirm with these earliest robotic probes, and then proceed to cover up, the first awesome remains of a once-extraordinary, solar-system-wide, ancient technological civilization on the Moon — precisely as Brookings had predicted. Four years later, the Apollo Program would come to full fruition, and the lunar astronauts themselves […]

Source – grrrgraphics.com – “… You won’t see dollars in wheelbarrows any time soon. Most of the Federal Reserve’s dollar printing goes directly to a handful of fantastically wealthy people at the top of the pyramid. Many of them own the Federal Reserve. The Fed is propping up a market that is mostly owned by the top. We The People are […]

VOODOO ECONOMICS: The Revenge Of “Real Money” Or “Cashless Enslavement Of Humanity”? – By Ben Garrison

The Creature from Jekyll Island, by G. Edward Griffin, describes the use of the Federal Reserve, the World Bank, and the International Monetary Fund to bankrupt national economies and place us under one world government. Read The Creature from Jekyll Island Here! Likewise, James Corbett has an excellent documentary on the Federal Reserve, an international […]

Source – mercola.com – “…According to a Hong Kong whistleblower scientist who has fled to the U.S., the Chinese government and World Health Organization representatives in Hong Kong covered up the Wuhan outbreak, allowing it to spread unchecked around the world” Hong Kong Whistleblower Alleges COVID-19 Cover-Up – Analysis by Dr. Joseph Mercola There Is Evidence […]

Source – davidstockmanscontracorner.com – “…In short, what we have is a government-ordered depression, not a macroeconomic recession that is purportedly remediable by a huge dose of monetary and fiscal stimulus. So the truth is, the Virus Patrol, not the Fed and Washington’s everything bailout brigade, is in charge of the recovery from the Q2 disaster” […]

We wear pants – otherwise we would just piss all over each other. 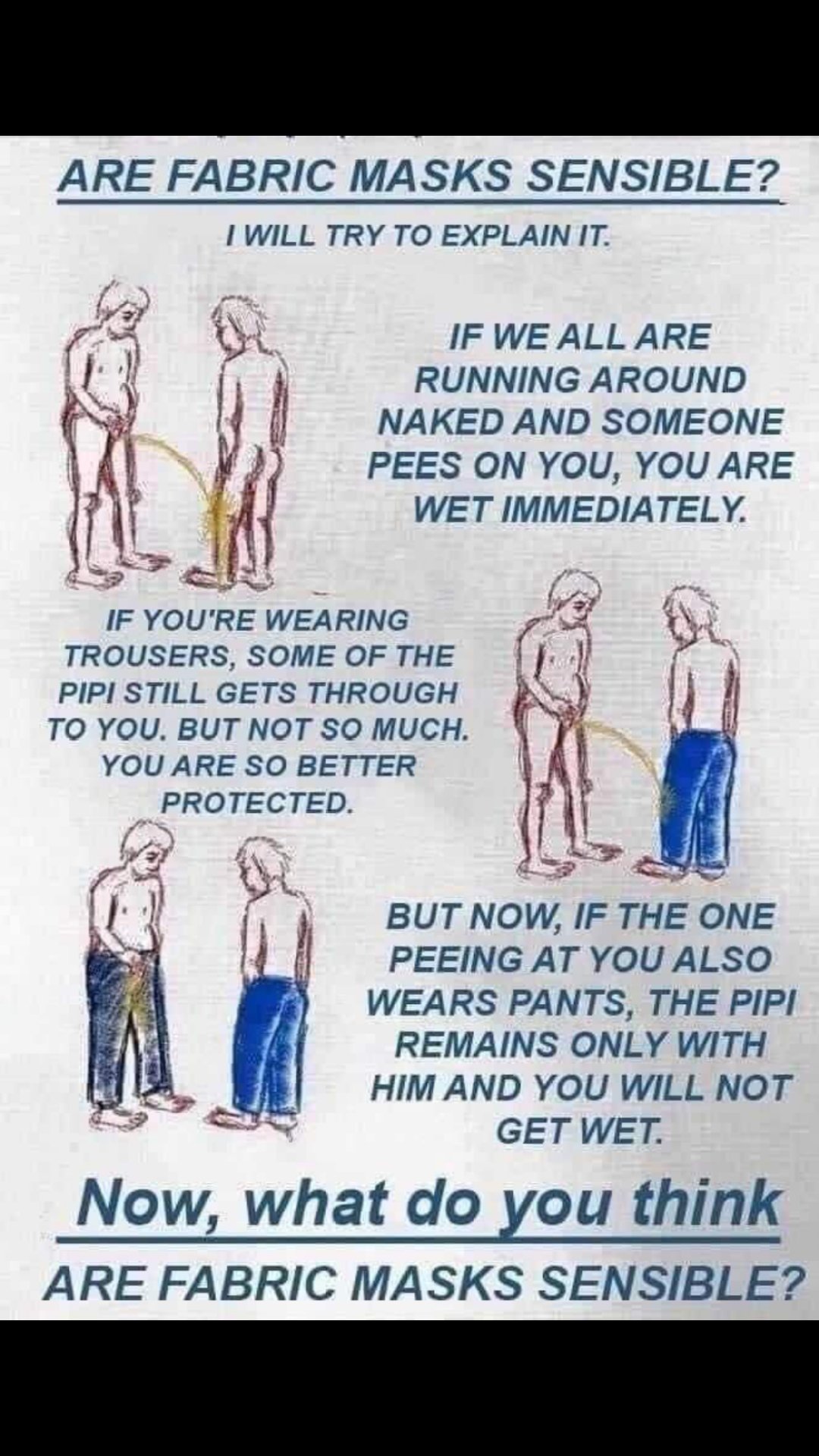 People who have a straight face while agreeing with this meme – sicken me.

It goes to show how some people have regressed to an infantile stage of development.
***

… see ya later
I’m off to piss off some people.

Source – zerohedge.com – “…A senior executive from AstraZeneca, Britain’s second-largest drugmaker, told Reuters that his company was just granted protection from all legal action if the company’s vaccine led to damaging side effects…key parts of the clinical trials are being skipped as big pharma will not be held accountable for adverse side effects for administering the experimental drugs” Red […]

Source – upliftconnect.com – “…In 1893, the chairman of physics at Harvard University warned students that there was no more need for additional PhD’s in the field of physics. He boasted that science had established the fact that the universe was a matter machine…all the descriptive laws of physics were “known…Two years later, the Newtonian […]

Tönnies: Corona outbreak despite mask requirement by Swiss Policy Research In June, 1,413 people tested positive for the new corona virus at the main plant of the German meat processor Tönnies (including the environment, 1,766 people). As far as is known, there were no deaths (IFR 0.0%), but five employees had to be given intensive care. […]

Flashing lights are key to MK-ULTRA. Subjects are given drugs like scopolamine, which weaken the will and stop memories from forming. Click Here To Read the Transcript from Congress’s Investigation of the CIA’s Use of Drugs against Unwitting Americans! They are hypnotized. And they are implanted with cybernetics. Click Here To Review 100 Patents for […]

Anger can be a paralyzing and debilitating condition.  But it can be a terrifying and degrading experience for your child if you’re taking your anger out on them.  Physical and verbal abuse of a child can have lasting and lethal implications, so it’s crucial that as a parent, you do whatever necessary to get your […]

Source – gizadeathstar.com – “…As far as I can tell, the USA, in addition to being in a real “cultural civil war” that has “gone hot”, i.e., become violent, is simultaneously engaged in a hot, or at least very warm, covert war with China” The Strange Seeds of Covert-Ops? – By Joseph P. Farrell Ph.D There’s […]

Source – newdawnmagazine.com – “…Egyptologists would have us believe the primitive tribes living along the Nile in oval huts who used mud-bricks to build mastabas for millennia were suddenly capable of advanced quarry operations, stonemasonry, architecture and corporate engineering. Of course, they cannot explain how these primitive peoples built a massive, precision-engineered pyramid using only round […]

HIDDEN HISTORY: ‘The Genesis Race’, The True Origins of the Species

Circumcision has endured because of tradition, not because of rationale nor medical benefit. Nor has it ever been successful as an anti-masturbatory measure, which is why it gained prominence in the West 150 years ago. When a custom remains after its original intent has vanished, it has morphed into a ritual. And ritual is one […]

I signed the petition, and you should, too. Let’s show the controlling powers that we are not going to go down without a fight. Please take the time to read and sign the petition at the link below to prevent a mandatory vaccine for Covid-19. Thanks for your support! Dr. Reizer https://lifepetitions.com/petition/no-mandatory-vaccine-for-covid-19 Listen to some […]

Say NO! To Mandatory Vaccines